The Last Night in the UK (originally posted Mar 8/09) 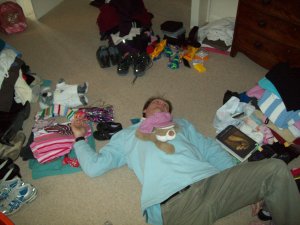 "I'll just grab forty winks, then get on with the packing...."

So here it is – the last night in the UK for some time….I did say I was going to try and avoid the lasts, and a whole bunch just zipped by without me noticing them. I bought my last Radio Times, filled up the car for the last time, I guess I ate my last UK fast food some time ago.

Today was just as frantic and fun-filled as the rest of the week has been. Mrs Dim’s Mum had arranged for us to spend the morning walking round Windsor Great park with Mrs Dim’s cousin and her aunt and uncle. They’re nice people, and the park is unbelievably splendid, but you know what? It wasn’t my first choice of activity. I don’t know exactly what I would have done instead – somewhere near the top of the list was a good long book and a toilet with a solid lock on the door – I may be a little nervous about emigrating after all.

I tried repacking the cases. There are nine of them now, which seems excessive to me when there are only five of us travelling, but I got frustrated with the endless roatation of the stuff – I wasn’t getting rid of any, just redistributing it, and there was still tons of our detritus ranged around the house. There’s nothing for it but to begin tomorrow with a roof-to-cellar search of the house, packing everything we’re not wearing and then praying the hire car has damn good suspension.

Mrs Dim’s brother invited us both out for a drink in the evening. Again, this was not my first choice, but he’s a nice guy and it had to be better than sitting in and trying to read a book, waiting for it to get late enough to go to bed and not sleep. As it turned out, the local pub was considerately displaying several reasons to emigrate to another country. As we walked in, one drunken patron was trying to remove his shirt, then there was raucous cheering as another man emerged from the toilets with a woman’s blouse on, lipstick roughly slapped across his face and extra hair drawn on his bald head.

Before long they all staggered off to another place and we had a lovely evening. The talk flowed as fast as the drinks, and during the course of our time in the pub several text messages of good luck came in.

I’m worried the cases are too heavy, I’m worried our visas will be wrong and we’ll be turned back. I’m worried my back will give out on the flight, I’m worried we’ll have some probem finding a house. I’m worried Mrs Dim will take a job she doesn’t want or love because it’s offered to her and she doesn’t believe in herself enough to turn it down. I’m worried about all these things and more, but I don’t consider, not for a single moment, the idea of not going.

Next entry from our apartment in Vancouver. Assuming I don’t break the laptop, get turned back at customs etc etc etc