Sometimes it feels like we’ve been living in Canada for decades, and other times I’m surprised to find an anniversary arriving. This week it’s Canada Day that has crept up. To be fair, it’s hard to miss the fact that it’s Canada Day, especially since The World’s Largest Home Improvement Retail Store is having a huge sale, but I only really thought about it recently in terms of last year.

Last year we were still living in the rental house in Birch Grove. We had a bundle of friends around us and the weather was so hot the kids had been sleeping in the basement because it was cooler down there. This year we’re out on our own in our crumbly new house, and we’ve had to buy a heater for the basement because it can get chilly. Oh, and ours is the only house for miles around with any Canadian flags hanging out. We’re hoping the sun will come out in a little while so we can go and visit our Birch Grove friends and share a little Canada Day cheer.

On the home front, it’s nice to have some progress to report. The IN-Laws have been working their socks off on our behalf, putting up archetrave around the doors, using baseboard (skirting board to you UK types) to cover the dreadful mess Mrs Dim and I made of the lino laying and rehanging doors downstairs to make it look nicer. Look: This is what is was like when we moved in…

And then we repainted and set to work tidying, and got this far:

And then we got the lino and tiles done and it’s a useful playroom and laundry at last: 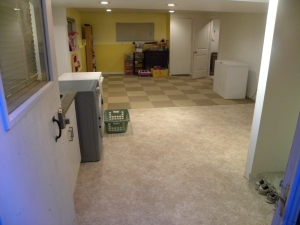 And with such improvements downstairs, we’ve been inspired to work on the rest of the house, putting up pictures, pinboards, shaving doors to make them close. All good stuff.

That, in turn, has inspired me to put a bit more effort into the other work. I picked up the Sinbad script again and bashed out another page and a half, and actually enjoyed it. I turned out a three-minute screenplay for a competition I’m entering as part of TLC (Because it’s a UK based writers competition, and Canada is just outside the UK these days…) I’m hoping to have enough of my old “Tribute to Myself” screenplay complete by the deadline for the Red Planet prize, and of course, I got the e-book finished. Tomorrow I’m going to the local printers to get a real print copy of the e-book to show around my writery friends over here, try and build up some interest.

The biggest surprise of all is that the Summer Holidays have begun and there’s been no panic. We haven’t even done the traditional “Summer Wish List” poster to help keep us on track because this year the Weasels are all off to various camps, entertainments and being babysat by grandparents while Mrs Dim and I go off to work. More than any other, this year will be the blueprint for the ones to come, so I’m hoping it will go well. I doubt we’ll ever again have the volume of visitors that we’re having this year, so we’ll be certain to make the most of it.