Posted on August 18, 2010 | 2 Comments
This week has been long-awaited. By me, anyway. The Eldest Weasels are off on their first residential camp. They’re probably going up the climbing wall in their kayaks right now, or practicing archery as they jump off the pontoon into the lake. Tiniest Weasel is too tiny to attend, so each morning I drive her over to a day camp at the local Heritage Village. (What? You don’t have a local heritage village? Well, if you’re in the UK, you probably live in one…) Anyway, the upshot of all this Weasel Absence is an increased likelihood of me achieving things. On the days when I am not Greeting, I have been rushing off to….The World’s Largest Home Improvement Retailer! Yes, strange but true, because this time I’m going in as a customer. It’s quite a thrill to go in through the main doors, click my fingers at the staff and demand service.

I’m going in to work on my days off because the Reno work has stepped up again. We’ve met the man who’s doing our new roof, and it’s going to happen very soon. Trouble is, there are a couple of other jobs that we need to take care of first.

And this is how it looks at the beginning...

***Sub Note: It’s not plastering, obviously. What I should be covering the door with is STUCCO, but I’m not, for several reasons.

1. My store does not sell stucco.

2.The rest of the house seems to be sheathed in some sort of reinforced concrete.

Instead I’m using a mix designed for another purpose entirely, chosen on the basis of some muttered advice given by a guy who was on the phone to someone else at the time. I’m mixing it using the time-honoured “That looks about right” method. END OF SUB NOTE***

I may have mentioned that I’m not a world champion at DIY. The fact that my staircase is still standing three months on is a source of wonder: 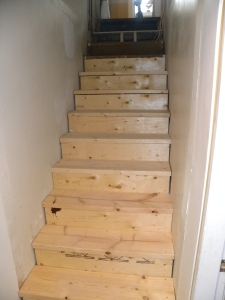 Advanced stairs - they go up AND down! And these days they look better than this too...

So, I did research on the internet, asked for advice at work, bought a carload of kit, and eventually had to admit that I couldn’t put off starting any longer. And to be honest, starting was the easy bit, because all I had to do first was staple on the waterproof backing. Like this: 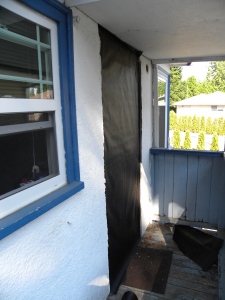 Then I had to cut some wire mesh to the right size and staple that on. I found the easiest way to do this was to catch my trousers, arms and hands on every bit of wire so that I resembled a person who’s just run through ten miles of brambles. I made a note to buy some gloves for the next day, when I wouldn’t be doing anything that needed gloves.

Finally though, I had arrived at the part I was dreading. I had to mix the stuff and slop it on the wall. This was where it could all go horribly, horribly wrong. Could I get the mix right? Would it stay on the wall, or all dribble off to make a messy lump on the floor? I mixed the first batch by hand, literally mushing the powder into the water with my bare, scratched hands. Then I read the warning on the bag that said the mixture was corrosive. YIKES! I loaded up my trowel and set to before the mixture…er…set too. An hour later, I had almost all the door covered and no more mixture: 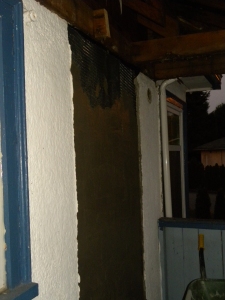 As darkness fell, so did my enthusiasm...

So today I swung by work one more time and picked up a couple more bags. Wearing my new gloves I mixed with a stick and got the rest of the door covered and slapped on a second coat. Now I reckon I’m one or two bags away from bringing the door up to the level of the walls, and we can set about demolishing the porch roof for tomorrow. Then I might get around to doing to writer-type work again. On the plus side, the e-book (www.tiny.cc/ghfo9) has been selling again and I’m itching to get back to some older projects. It’s all working with the hands, folks. 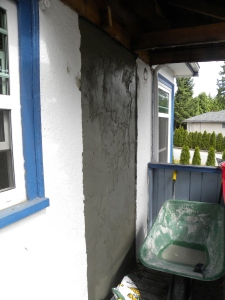 Yes, it's scruffy, but when we take the stairs away it'll also be ten feet off the ground, and who's going to notice?