Writing a play for Community Theatre

Today, as a marketing ploy and because I don’t want to write another blog piece that starts “I’ve been thinking…”, I’m handing out a free sample from my book (Title above). I’ve chosen the start of the chapter about the most common mistakes made by folks writing for the Community Theatre Stage. Hope you enjoy it. 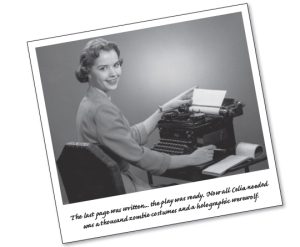 After a few years of being published, I took on the job of Script Reader for my publisher, Lazy Bee Scripts. The company was being inundated with scripts, and they needed someone to help with the initial sorting of the new arrivals. This gave me a chance to review and report on hundreds of scripts from a huge variety of writers. Scripts are sent to Lazy Bee from all around the world, by people who have been writing for years, people just starting out, and people trying stage writing after success in some other form. Before long it became obvious that the same mistakes were being made over and over again.

Writing a screenplay for the stage. I’m never sure if this mistake is made because the authors have never visited the theatre, or because they wrote the idea as a screenplay first then attempted to convert it to the stage. Since the primary market I am reading for is concerned with the amateur stage, where resources and stage space tend to be limited, there is little point in saying “but I’ve seen some pretty spectacular things on the West End stage”. Yes, I know you can see ‘Chitty Chitty Bang Bang’ fly out over the audience in some theatres, but you’re not likely to see that done in your local village hall or school production. Time after time I read plays that open in a living room, described in perfect detail. Five minutes later the action moves to a second, equally detailed location for just a few lines of dialogue, and then another change. If the play is to be performed on a regular small stage, the only options are to have a subdivided stage with many sets permanently erected and the action moving between them, or to have a minimalist stage with movable furniture to signify the various locations. I used a combination of these devices in ‘A Time for Farewells’, with one half of the stage permanently set as a bedroom, and the other half different arrangements of three stage blocks that became a bar, a hospital room, a lounge.

This is entirely possible, but the important thing is that YOU are the one who should decide that this is the way the play should be performed. There’s no point in writing an epic masterpiece that includes horse races, the sinking of the Titanic and an aerial dogfight and then saying “It’s up to the director to work out how to stage it.” If you’re looking for the best of all possible worlds, you’ll end up with a script that doesn’t depend on a trapdoor in the stage or some other technical device (like flying wires, back projection or giant inflatable gorillas) for a successful production. You can certainly suggest that these elements would make the production better, that they were part of your original vision, but allow for the fact that not every group will have these things at their disposal. When the prospective director reads your script, they should be able to see the play being performed on their stage in their mind’s eye. Which leads into point number two:

I reviewed a play once that had a character coming onstage carrying a large box. Halfway through the scene, a second character pops out of the box (which is still being held by character number one) and delivers a speech. I couldn’t see how this would be possible unless one character was incredibly strong, or the bottom of the box was open and character two’s legs were screened by some handy scenery. As it turned out, some unenclosed production notes would have told me which characters were to be played by puppets – that information would have put a different spin on things.

If you’re planning on having a character disappear into a magic cabinet, it would be kind to indicate how you imagine this being done: “The back of the cabinet is screened by the mangle, and Aladdin climbs out the concealed flap in the false back…” You don’t need to include a diagram with numbered and labelled parts, but your director needs to have a clue what you’re thinking about. This is particularly important in British pantomime transformation scenes, like Cinders’ “Rags to Ball Gown” or “Pumpkin to Coach” moments. It’s all very well writing “There is a flash and a bang and the pumpkin is replaced by a shimmering coach…” but that’s leaving it all to the director. A little research will show you there are many ways of accomplishing this effect – bringing lights up behind a gauze, unfolding a special piece of scenery… Again, read a few scripts, see some shows, talk to some experienced dramatists. Then put your own spin on the process.

I know, I know, it seems really petty to complain about mistakes like this. Who cares about full stops and question marks? It’s the content that’s important, isn’t it? Language is a constantly evolving thing, textspeak is becoming a valid form of grammar, blah, blah, blah! Well yes, language does evolve, but at the moment there are still guidelines and rules about grammar, spelling and punctuation, and you can be pretty sure that nothing much has changed in the way English is written since you were at school. Delivering a script for your publisher, or even simply turning one out for your local theatre group, should still be treated with the care and attention to detail you would give a job application letter.

Grammar exists to make the written language easy to hear in your head. Commas give pauses in the sentence, full stops indicate when one idea stops and the next begins. These things are important for your words to be understood, and if people can’t comfortably read what you’ve written, they’re not going to enjoy the content. They’re not going to understand the content. They’re certainly not going to buy or perform your play. Also, if you’re not careful enough to spot errors that are highlighted for you on the spell checker of the word processor you wrote this on, how can any customer be sure you’ve been careful enough to produce a decent plot? Are there as many errors in your storyline as there are in your typing? Bear in mind that the editor or publisher is likely to be someone fond of the written word – they’ve made a business of it, after all. They are exactly the kind of person who gets annoyed by incorrect spelling, and they are also exposed to it on a daily basis. If your script contains no ghastly spelling or punctuation errors, that will be another factor in your favour.

The only exception to the rule about correct spelling and grammar is when you choose to get it wrong. Not everyone speaks the Queen’s English like an Early Fifties BBC Radio Announcer, so of course it doesn’t make sense to have Bruno the door bouncer throw a drunk into the street and yell after him :

Bruno would shout  “Sling yer ‘ook, drunk!”   or something worse, and you won’t need to add in the ‘h’ that he drops. But the apostrophe shows the letter has been dropped on purpose, not as a result of rapid typing, and that Bruno is not making monkey noises. In summary, your characters are allowed to speak ungrammatically, or in dialect, but for your readers to correctly interpret this type of speech, it needs to be clearly punctuated. 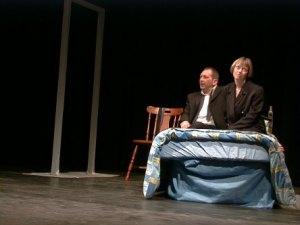 A Time For Farewells, as performed at RAF Halton

To get YOUR copy of the ebook rush over to the TLC website  Best of luck with your writing.

One response to “Writing a play for Community Theatre”