Getting an education and learning a lesson. 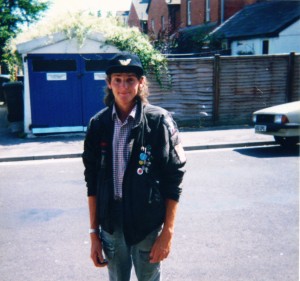 I promised myself that this year I would take some kind of course, and the first one that has come up is the “Write it forward” workshop. I’ve signed up for the “Building your Author Brand” class, because it applies to me as a playwright as much as it applies to those aspiring novelists out there. It’s run by Kristen Lamb, my Social Media guru and author of “We Are Not Alone”

It’s just the course I’ve been looking for: It’s relevant to the work I WANT to be doing, is available over the net, and doesn’t take more time than I can spare from Weasel wrangling, greeting shoppers and writing award-winning plays.

So that’s me getting an education. Learning the lesson was much more unpleasant. Part of my job at the World’s Largest Home Improvement Retailer is to make sure the people slipping out through the In door aren’t doing so with power tools hidden under their hats. Almost all of them aren’t. But on Saturday a couple came through my door and they made me suspicious. Once they had been and gone, I compared notes with a manager and we discovered how they had contrived to steal a modest amount of stuff under our very noses. I was angry, with the thieves and with myself for not acting sooner on my suspicion.

Imagine my amazement yesterday afternoon when the same guy came back. Not only came back, but smiled at me and announced “I’m back again!” He obviously believed that his theft had gone unnoticed and he was back again. Obviously I’m not going to go into details of his method, but he set things up to pull the same stunt again. This time I was prepared and did one simple thing that proved he was stealing something. He went nuts, barged me and my fellow associate aside and legged it. We’re not allowed to attempt to restrain anyone, so I simply followed him in case he was getting into a car. No such luck.

So he wasn’t led away in chains, cursing my intervention, but I don’t think he’ll be back anytime soon. Sadly, now I look at everyone who comes in with suspicion, and I have a knot in my stomach when anyone approaches the door with a full cart. It’s never been a joyous job, never been a laugh a minute, but I don’t like to think that this one greedy thief has soured it completely.

PS: The photo? Well, that was the last time I was in a proper full-time education course. My year at Portsmouth University doesn’t count because the course was rubbish.

3 responses to “Getting an education and learning a lesson.”