How I didn’t make it big….And you could too! 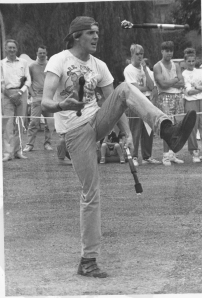 I once thought juggling would take me to the Big Time….

We all know the odds of hitting the lottery jackpot are small, but we don’t care about the size of the odds, just the size of the cash prize. It’s the same for authors, for the most part. We all start to write because we have the story there, the characters marching around inside our heads, making us laugh, or cry or forget to put the dinner on. But what we’re all hoping for, our guilty secret, is that this is the story that will be THE BIG ONE.

You know what that means, right? That this story will be our Harry Potter, or Catcher in the Rye. Well, maybe not Catcher in the Rye, poor guy never published another thing, did he? Hmm, wait a moment…J.K.Rowling. J.D.Salinger. J.D.Robb…. Maybe all I need for success is TWO initials before my surname! And one of them has to be a J!

Oh. Yes, I still need a cracking story. Damn, thought I was on to something there.

Anyway, they key thing here is that as authors we dream of getting that letter (or email/carrier pigeon/ text/ singing telegram) telling us our book is number one and we can send out for gold-plated egg rolls and book a compartment on the Gravy Train. No, we don’t write for the MONEY, we write because we HAVE to, but the money would be really, really, nice. Mainly because it would mean we never had to do anything but write ever again. If I won the lottery, I wouldn’t go back into work to greet people (Sorry boss…) but I would keep writing. Even though I wouldn’t ever need to sell another play to feed my tiny weasels, I would still write. If people asked me what I did, I wouldn’t say “I’m a millionaire, I don’t do anything!”, I’d tell them I was a playwright. I might also hint that I was vastly wealthy, but that’s just ego.

Today’s secret is that the big hit is not only unlikely, it’s not necessary. Yes, things would be great if you made the bestseller list on your first go, but there are other ways to achieve success.

There was a man called Mark Robson. He was a pilot, and spent a lot of his downtime writing the novel that he thought about as he flew. After numerous rejections (well, actually, not many, but we know how disheartening a rejection can be, don’t we?) he gave up on being published. Until his Mum presented him with a printed, bound copy of his novel for his birthday. Seeing how cool his book looked all, you know, real, and everything, Mark shelled out for self-publishing. This was before the days of Amazon and e-books, so he filled his house with 1500 copies of his book and went to work. While still, as it were, going to work. Despite his heavy piloting schedule, he sold all those books, getting onto the bestseller list in his local bookshop. That made the national chain interested and they took on his book. Then people asked about the sequel because he had put “First in the trilogy” on the cover. (You should really think these things through, folks…) But he produced a sequel and worked just as hard on the sales. The last I heard of him, he’d finished the third book, a major publisher had taken him on and he was earning as much from writing as from flying.

Once upon a time, I had written only three short plays. I had won awards and had the plays produced, but I was not rich. How could this be? I found a better way to get the plays to the audiences, joining forces with friends (TLC Creative) and finding a new, forward looking publisher: Lazy Bee Scripts .  It’s been years since those first three plays, but now I earn more from writing than I do from my part time day job. I’m a long way from the gold-plated egg-rolls, but each day gets me closer. Tell yourself you’re in this for the long haul, that writing these books/plays/greetings cards is keeping you sane, not bankrolling your old age, and you can relax a little about it. Concentrate on building your author profile by using your blog, Facebook and Twitter, and you’ll find that when you do present your product, there will be a ready market.