Nothing to see here…. 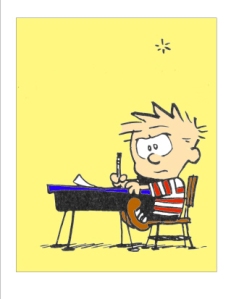 I find this more than a little ironic. Last year I put a lot of time and energy into blogging. I tried to blog at least twice a week, and tried to find subjects that were connected to my business interests (writing, plays, theatre) and would also catch the attention of people surfing the web.

I was waving a big sign saying “Come read my stuff! Find out how interesting I am and then buy my plays/books/t-shirts!”*

After six months I had radically improved my readership stats. It was hellishly impressive. On the other hand, I hadn’t written any new plays. Or anything else. Sales of the plays already published were slack. I hadn’t improved my situation at all. I had lots of readers who enjoyed my blog, which was nice, but….not a lot of use in terms of my business model.

Since February began I’ve been running this new system, and it’s working. I have produced a full length play, and a one act play that I’ve been MEANING to write since August last year. I’ve also moved on with other writing projects and gained significant confidence about taking on new challenges.

What I haven’t been doing, is blogging. I realised this the other day when I was updating my “Books I read in March” list, and found that I had only blogged once since posting the list from February.

This is my apology, if you’re a regular reader. I enjoy having a blog, and I like the fact that some people have found it a useful conduit. I love being able to talk directly with people about writing, or discussing points raised in the posts. But I’m not a blogger who writes plays, I’m a playwright who blogs. I know it’s important to have an author platform, and be approachable, and interact synergistically with your readership, but hey, I’m on G+ and Facebook and Twitter too.

I’m not going to feel guilty about intermittent blogging when the alternative is reviewing the recipes I’ve used for lunch, or how I prefer Tim Horton’s to Starbucks. I hope you’ll still read what I post, when I post, but if not, I’ll understand.

*Nobody EVER bought the t-shirts.

One response to “Nothing to see here….”