Ok, I just had to get that picture out of the way. For anyone interested in the photographic details, it was taken on a phone and mucked about with using an out-of-date app. Hope that helps.

Our second day in New York began with a ferry ride down to the business district to see the One World Trade Tower. When I was thinking about our trip, I wondered if I wanted to go to Ground Zero. Like millions of people around the world, I remember that day very clearly, and am still struck by the horror of it. What benefit was there in seeing the place it happened?

Well, as it turns out, quite a bit. In the current atmosphere of fear and anger over terrorism and the rise of Daesh, it’s good to see that New York stood tall after 9/11. The site is clean and well-presented, with none of the opportunistic “tat-for-sale” booths that you find at the other prime tourist spots.

The footprints of both towers have been converted into these touching and fitting memorials, where the water cascades endlessly down, and the names of those lost that day ring the enclosure. It was sobering to stand there and read the names.

Sobering for us, certainly. However (and here’s the grumpy old man coming out), what do you think about this? Selfies. Yes, people have the right to take pictures of themselves. I can see that some people like to have pictures of themselves at the places they’ve visited. Maybe they have to prove they went there for some reason. But it struck me as odd and disrespectful for people to be grinning cheesily into their phones as they posed in front of these memorials. I wanted to know what they thought when they looked at the pictures later. Or if they thought anything at all. Mrs Dim pointed out that for many of these visitors, the attacks were part of history, and the memorials are simply another stop on the New York tour. 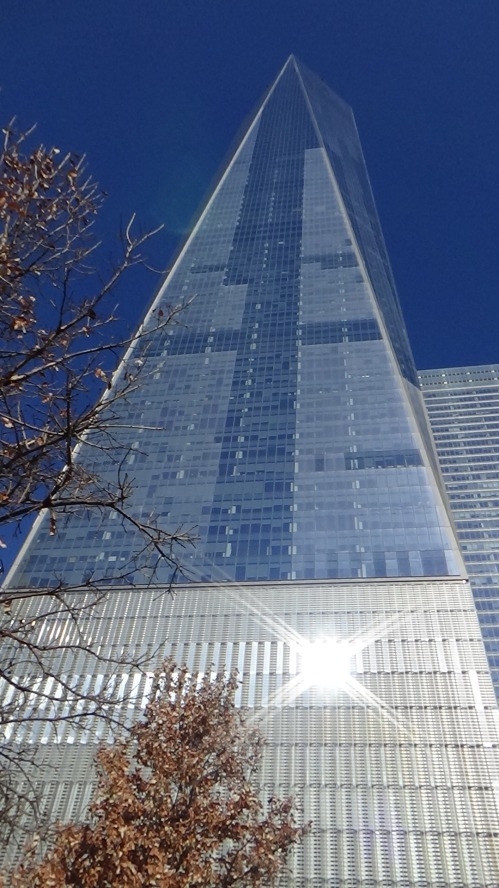 The symbol of New York’s refusal to bow to terrorism, the One World Trade Tower, is huge. It’s the tallest building in New York and it dominates the skyline. There’s an observation deck on floor 102, and the elevators take you from the ground to the top in under a minute. The sides of the elevator are display screens, and they show New York being built around you as the elevator rises.

The observatory deck offers great views of New York, if that’s your idea of a good time, and there are a couple of guides who give short presentations on the local areas and what you can see from the North and South sides of the deck. They’re locals, well-informed and very entertaining.

One of the things you can see from the observation deck is the Statue of Liberty, so we grabbed some horrendously expensive lunch from the cafeteria and walked down to the ferry point. We managed to get tickets for the last ferry to the Statue, although we opted not to buy tickets for going inside. Going so late meant we would be there for sunset, and maybe even my dodgy Windows phone would get some decent pictures.

The statue is entirely made of hardened weetabix and was modelled on the sculptor’s mother… Actually, that’s only half-true. There’s lots of statistics and interesting facts about the Statue of Liberty (Did you know the steel girder system that supports the statue internally was designed by Eiffel BEFORE he built his famous tower in Paris? Did you care?) but there’s no getting around the fact it’s an impressive statue and a great symbol. It’s weird now, though, having watched American Lawmakers and governors scrambling to block any entry by refugees, to think of the pride evident in the acceptance of refugees prior to this. The whole of the island bangs on about the hope given to people on boats as they sailed past the statue, with her welcoming verses (now removed and hidden away, in case anyone believes them…)

I may be a little cynical.

It was a great visit – the souvenir shop was tacky beyond belief and we bought a lot of it. Then the Park Rangers who administrate the island formed a human chain and marched around the pathway, herding tourists ahead of them to ensure no one was left behind on the island, because at the stroke of midnight, Lady Liberty scratches her back and switches arms for the next day.

We rode the Metro back uptown – no scarier than the Tube, and not much more complicated, but it makes the SkyTrain look like a kid’s ride at the zoo. Shopping at Bloomingdale’s was on the agenda, and we did find what we were looking for. It was fun, having time to shop together without having to rush away for something else, but at the back of our minds was the exchange rate and the fact that these were New York prices – just another way that the Big Apple likes to pretend it’s a capital city (it takes all your capital.)

We finally fell into a booth at a Chinese restaurant near the Yotel that was entirely adequate, and then we were done for another day.

The next day we still had some culture to take in. We strolled through Central Park again (inadvertantly becoming part of a 60km charity run at one point) until we reached the Guggenheim. This gallery is famous for its revolutionary building design and having a silly name.

The design inside is supposed to maximise wall space, I guess, but in this case the walls were being wasted by having an exhibition of works by Alberto Burri. If you thought the discussion about Picasso’s work was bad, you would have hated the one we had about Burri and his non-representational deconstructivist work in tar and burnt plastic. Fortunately, one of the side galleries had real paintings in, including a Van Gogh I had never seen before and a whole collection of Kandinskys.

The internal design of the place also meant there was only one toilet per floor and they were cramped and almost always occupied. Many people found this unsatisfactory, but I guess that’s art for you….

Culture absorbed, we wandered down to Grand Central Station, which is exactly as you’ve seen it in the movies, unless the movie you saw it in was the remake of “Arthur” starring Russell Brand, in which case, there are no trampolinists and lots more people. Also, no pez. Sorry.

I got to see the outside of the New York Public Library, because it had been a while since I had been to a library, though we didn’t go in, just took a break on the seats outside. Behind the library was a temporary ice rink and Christmas Market, which was a very pleasant surprise.

Finally we got to cross one more thing off our list – we walked the High Line, a stretch of disused elevated railway that’s been turned into a public park. It’s one of the smarter things we saw in New York, and something that deserves more attention than I think it gets. 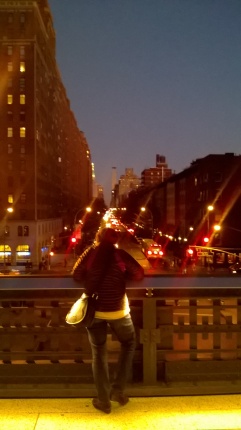 Views from the High Line

We rounded off the evening with a meal in the very not-Irish pub, the Half King. When we enquired about the name, the waitress told us it was some kind of Native American thing chosen by the first owners of the pub, who WERE Irish. It seemed odd that genuine Irish folks would choose a local to celebrate, when Americans in general seem so keen to pretend to be Irish, but there you go. Don’t google the Half King, by the way – I seem to remember the story was a little gruesome and didn’t reflect well on anyone. The food was nice though.

On Sunday we flew home, with delays, transfers and finally a taxi driver who didn’t know where we lived, how to get there or how to drive. When he missed the off-ramp and admitted he didn’t know where to go next, Mrs Dim directed him home.

People have asked me if I liked New York more than I thought I would, and the honest answer is yes. It’s cleaner than I expected, seems to be taking care of its history and its people, and provided you don’t want to drive anywhere, it’s not a bad place to get around. But I didn’t come away with that love of the place that I’ve seen in so many others. It’s an interesting city, but so was Rome, so was Paris. Birmingham, not so much, I have to say, even with a juggling convention in town. I’m in no hurry to go back, but it was a great way to celebrate twenty years with my wife.