Spotlight on the Author – L.J. Cohen 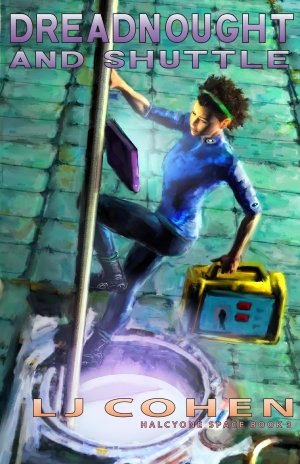 Remember a few weeks ago I posted about my imaginary friends, and how I finally got to meet one of them? Well, that very same friend has graciously consented to be the latest author under the spotlight and answer my impertinent questions about writing.

Lisa Cohen (who writes as L.J. Cohen) has a great web-presence, and you can find out more about her and her work in a number of ways. She’s active on G+(https://www.google.com/+LisaCohen ) and Twitter (@lisajanicecohen) as well as running her own website (http://www.ljcohen.net/ ) and blog ( http://ljcbluemuse.blogspot.com/ ) . She can also be found over on Facebook (http://www.facebook.com/ljcohen ) and Goodreads (https://www.goodreads.com/author/show/5305326.L_J_Cohen ), but if you just want to skip straight to her book list, check out her Amazon Author page for the very latest available materials : http://www.amazon.com/-/e/B006QL6GA0

1. When did you start writing?

Well, that depends on what you mean by start and writing. Apparently, I wrote my first short story when I was in early elementary school. My father had kept it in his wallet for years – some silly paragraph about a new gnu that I had written for homework during a unit on homonyms. The paper was the kind with wide lines and the dashes in the middle that teachers give students to help them write more legibly. (News flash: it didn’t really help. My handwriting has always been a mess.)

I’ve written poetry since my early teens and continuing to the present day. Poetry remains my home base for writing. But I completed my first novel between 2004 and 2005 as a result of a challenge from my husband. I’ve written a novel a year since then.

2. What was your path to publication?

A twisted and torturous one?

Not knowing any better, I revised and queried for that first novel in 2005. It wasn’t anywhere near ready for prime time and I’m slightly horrified that it actually got a few partial and full requests. Meanwhile, I was working on novel number two and getting better at craft. I queried for that one, and didn’t get a lot of traction. Then I wrote novel number three and one of my queries resulted in being picked up by an agent in 2009.

Over the next several years, we went out on submission for three different projects and
despite close calls, she was never able to sell any of them. In 2011, indie publishing was just starting to be an option and in many ways, it was still the ‘wild west’ of publishing. I consulted with my then-agent about indie publishing one of the manuscripts that had gotten a bunch of praise from the big six (when there were still six) publishers, but ultimately turned down. She and I thought it might be a way to show market interest in my work. So I created an imprint, gave myself a crash course in what-the- hell-does- a-publisher- do-anyway and published THE BETWEEN in January of 2012.

It sold modestly and got good reviews, but it didn’t break out in any way and didn’t help me break in to traditional publishing. A few years later, my agent and I parted ways when it became clear that I couldn’t write the kind of books she could sell and she couldn’t sell the kind of books I could write.

Since then, I’ve published four additional novels, a short story collection, and co-edited an
anthology and have never looked back. DREADNOUGHT AND SHUTTLE is novel number
six.

3. Who was your biggest influence when you were starting out?

Starting out in publishing? Probably Lynn Viehl. She was a traditionally published midlist
writer of spec fic and romance. I found her through her blog, http://pbackwriter.blogspot.com/ and was immediately inspired by her work ethic and the way she interacted with her fans. She was always incredibly polite and respectful of her readers and so amazingly prolific. We became friends through her blog and continue to be friends to this day.

4. What is your favourite piece of writing advice?

Ditch the advice and do what works for you. (I just made that up!)

5. If you could send one Tweet back in time to your past self, what would it say? And would you listen?

Quit spending valuable resources worrying what people think. I probably wouldn’t have
listened. Past me could be an idiot. (Current me can be one, too.)

6. What’s the logline for your latest book?

Funny you should ask this! Writing pal Susan Spann just ran a twitter chat on creating
elevator pitches for your novels. It was really helpful for me in crafting that biggest of big
picture views. This is the elevator pitch for DREADNOUGHT AND SHUTTLE, book 3 of
Halcyone Space and my next release:

When a materials science student gets kidnapped, she’s drawn into a conflict between the
young crew of a sentient spaceship, a weapons smuggling ring, and a Commonwealth-wide conspiracy and must escape before her usefulness as a hostage expires.

Or even shorter: MacGuyver in space.

7. Do you take part in a writing circle, either online or in real life?

I used to be part of formal workshops, both online and in physical space. I currently have
online support networks, both through Google+ and FB, but for writing critique, I now work with a lovely cadre of beta readers.

While I think workshops/crit groups can be extremely useful, they can also promote a kind of writing by committee that blunts a writer’s voice. Writers need to walk a fine line between being open to critique and holding to their creative vision.

8. Finally, what word do you always type incorrectly?

Word? How about lists? I have a form of dyslexia and there are certain words that visually
look identical to me. Through, though, thought ALWAYS give me trouble. For a lot of other
words, my brain moves faster than my fingers and I often leave a letter out or transpose
letters in a short word.

Leave a comment below and have a chance to win one of L.J. Cohen’s books! A lucky winner will be selected at random in a week’s time.

10 responses to “Spotlight on the Author – L.J. Cohen”