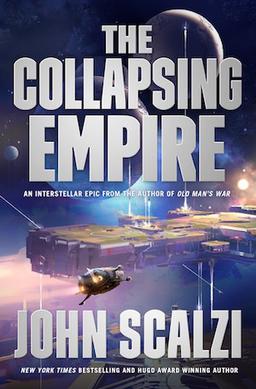 I’m a big fan of John Scalzi. I first ran across him by reading some of his articles for his blog, Whatever, and that lead me to his books. The first may have been “Old Man’s War”, which is itself the start of a multi-book series. Before long, I was buying his books through Audible, because I listen to audio books on my way to work, and Scalzi’s are often read by Wil Wheaton (Not the Old Man’s War series, that’s William Dufris and he’s marvelous too.) Still Wil reads “Fuzzy Nation”, and “Lock in” , and “Redshirts”, and “Agent to the Stars”, and the Collapsing Empire trilogy.

Scalzi has his haters, for his perceived liberality. They say all kinds of stuff about his books, and I have to say, I don’t get it. I’ve been reading sci-fi since I picked up The Hitch-hiker’s Guide to the Galaxy at age ten. I’ve read Hard Sci-Fi, Military Sci-Fi, Space Opera, Speculative Sci-Fi, Psychedelic Sci-Fi, Afrofuturism. I even read “Battlefield Earth” all the way through. Scalzi’s books are good, solid adventures, with interesting characters and some great lines. There’s one thing that he does well that I think is almost unique, though. In both the Old Man’s War series (The latter part, with Harry Wilson as the front man) and The Collapsing Empire, he performs the most amazing balancing act. 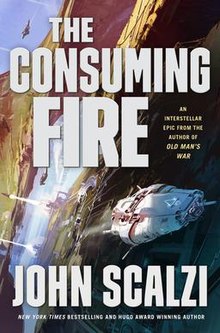 Look, in most stories, the authors tend to follow the Hollywood paradigm: at the climax of the action, the villain is winning, or has even won. The good guys are beaten, or captive, or sometimes even a bit dead. At THAT point, just AFTER it’s all too late, someone pulls a winning move out of the bag and Everything Is Ok again. This is fine, and makes for some tense cinema, but it can be really galling to read/watch as the heroes get a pasting. Sometimes they even have to be stupid to allow the villain to get the upper hand, or their powers weaken inexplicably (Think of Captain Marvel punching her way through a gigantic spaceship, then bouncing off Thanos like she’s a gnat). It’s like the story is supposed to be as chessgame between the two sides, but one side gets takes all the pawns, puts the king in check and sets fire to the board, then the other player drops an anvil on their head to win.

What Scalzi does is allow his heroes to be clever, to work hard and succeed in throwing off course the plans of the villains, but NOT derail them entirely. In The Collapsing Empire, the first book in the trilogy, Cardenia and Lord Marce and Kiva Lagos have to contend with the House of Nohamapetan arranging assassination attempts, corrupt business dealings and reaching for the throne itself. This being the first of the trilogy, you might expect things to go badly for the heroes, for the second book to be the struggle to regroup, then the third to be the triumphant final battle. That’s not the case – the bad guys make their plans, the good guys disrupt those plans, but the plan changes and the bad guys move on with it. Like a chessgame, their are captures and sacrifices and reversals, but the game doesn’t end until one side or the other reaches the winning condition.

I won’t spoil the ending of the trilogy, because it’s a great series. The problems the good guys face are huge, and they’re not all the creation of the bad guys. The third book was a real rollercoaster ride, with some very unexpected moments and a conclusion that was right for the story, even if it’s not the one Hollywood would pick.

If you can, grab these books. If you have the option, get the audio version, because Wil Wheaton really puts his heart and soul into the reading – this is not just narration, he really does conjure these characters for you.