There are several points in the year when we tend to reflect on life and our progress through it. New Year’s is the obvious example, but we tend to look forward there. Birthdays make us look back, to compare where we are with where we thought we would be.

Well, except for birthdays in 2020, because who thought we would be HERE? 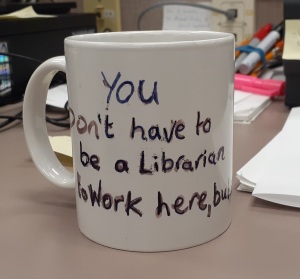 I’ve been luckier than most, able to return to a job I enjoy, doing much the same as before the pandemic. Yes, we have to wear PPE, and we’re dropping library materials at the door, rather than going in to chat with people and check the books out to them on the spot. It’s far less social than it was, which impacts the patrons more than it does me. Some of our patrons are elderly, and our visits were a welcome distraction from a quiet life. These days it’s likely even quieter.

The pandemic has affected me in other ways though. Like many people, I thought the initial work from home/furlough would mean a burst of creative work. I got my workshop cleaned up and organised, and was ready to rocket through a bunch of projects, as well as writing more plays and maybe a book.

That optimism lasted a few weeks, and though I’ve made some progress with my Clone Trooper armour build, there’s still a long way to go, and every time I look at it, I’m not filled with enthusiasm any more. I managed to finish an old, half-written play, but other than that there has been no new material created at all. When I talk with Mrs Dim about her experiences in working from home, I realise the underlying pressure of living in the pandemic, exacerbated by the idiots who refuse to wear masks, or abide by social distancing, and the endless stream of miserable news from south of the border.

Why do we care what happens in America? Well, every time I think that, I remember someone here at the library saying that “Canada needs someone like Trump…”. They thought electing a businessman was a smart idea. It’s not, of course, because countries aren’t businesses, and even if you WERE to elect a businessman, why not choose one who wasn’t such a failure? But I look at the growing authoritarianism in America, the spinelessness of the GOP as they seek to retain power by aligning themselves with criminals, and I watch the breathtaking incompetence and lack of awareness in the UK, and I worry. Because there are those people here too, people who will break the rules to see if they can get away with it, people who insist they’re not racist, but pile all the blame for the problems of society on people who look different, or live differently.

If I ever thought about being 48, I never imagined it would be a time when I wanted more compassion and empathy in the world. In the US and UK, the governments are committed to making money for their friends at the cost of the people, and they don’t see where that’s a problem. I’d like things to be different when I reach 49.