Here we are, back at the start of another school year.  (At least it is in the northern hemisphere; I have lost track of the way these things are managed in the antipodes.)  For anyone planning their theatrical season, this is a reminder that we have a variety of seasonal plays including entertainments for Halloween, both religious and secular Christmas shows and a huge variety of other material for schools and youth theatres.  Of course, it’s also the run-up to the panto season, and again we have vast numbers available.  If you’re looking for something specific, try our pantomime pages or the search engine.  If you’re in a hurry and need a short-cut to our best sellers, then follow the “what’s hot” link from the Lazy Bee Scripts home page.

Comedy sketches and short plays.  (The plays may also be comedies or may evoke a broader spread of emotions.)  Each runs to less than 20 minutes, by our estimate.  However, it’s worth noting that our reckoning is wrong!  It’s based on word count, so it judges all plays in the same way.  This is fair, but in practice the timing will vary enormously.  Someone made good use of our script feedback (via our Contacts page) to tell us that their production of Two Surgeons (by Damian Trasler and Steve Clark of TLC Creative) ran at 4 minutes, not the 10 minutes that we suggest.  In that case, it’s very close to stand-up comedy – high rate of patter and little action – so we will tend to overestimate, whereas for plays with movement and dramatic pauses, we may underestimate.

Two new musical pieces, both aimed at schools (probably the upper years of primary school and the lower years of secondary school, respectively).

Theatre writing covers a wide range of subjects and purposes.  Sometimes it’s purely for fun, sometimes it’s a cathartic experience (in which, for example, the writer gets to choose which relative gets murdered on stage).  It can also tackle some of the big issues of our age. Outside politics, two of the issues that exercise me the most are the prevelence of dementia and the rise of artificial intelligence. Consequently, I’ve written a one-act play that combines the two subjects.  (My feelings about this echo Vaughan-Williams remark about his fourth symphony: “I don’t know whether I like it, but it’s what I meant”.)

I’m amazed by authors’ capacity for invention.  The new full-length plays include a tale about an autocratic publisher.  I couldn’t possibly imagine anyone like that…

Sheer Luck Holmes was produced by the Apollo Players (on the Isle of Wight).  A picture of their dancing policemen appears on our web page for the script.

Plays for Schools and Youth Theatre

There seems to be a theme running through our new youth plays, but, for the most part, it’s Greek to me:-

Just one new murder mystery this time, but featuring the reprise of the detective from the best-selling Death on Delivery:- 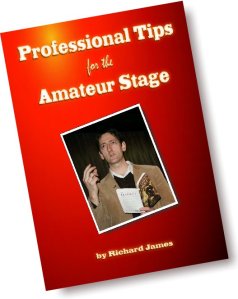 A new publication by a familiar face.

Saying Richard James is an experienced actor is like saying Orson Welles got a bit tubby. Richard has performed on the Community stage, on the professional stage, on television and in feature films. Indeed, he can be seen in a film that recently picked up an Academy Award*. But that is not the end of his abilities, oh, no. As well as writing many excellent plays, Richard has put down what he’s learned as an actor into a neat e-book that is on sale now at Lazy Bee Scripts

If you’ve ever acted, or you want to act, or you want to direct some actors in any format at all, this book is worth reading. Richard knows his craft, and is both eloquent and down to earth about it. Don’t just take my word for it, go read the book!

Oh, and while you’re there, you might want to take a look at another e-book on sale. It’s just a little something about writing plays for the Community Stage. Some people have been quite pleased with it.

*The Wolf man. Look for him shouting ”Doctor Hoenegger! Doctor!” in the lecture room scene. Marvellous!