It’s an unfair saying : “Don’t judge a book by its cover”. It comes from an age when books didn’t have the beautiful and carefully considered jacket illustrations they have today. A book might have a plain red board cover, and if it were a particularly loved book, that cover might be creased, and stained and look more than a little unattractive. But it was that way because it was a GOOD book, because it had been read so much that the cover was in disrepair. It wasn’t right to judge that book by the state of the cover.

We’ve taken the aphorism and applied it to people – just because someone is handsome, it doesn’t mean they’re nice. Like all aphorisms, it has a counter: we’ll cheerfully tell friends going for interviews that “first impressions are important”, as if the interview panel will never have heard of judging a book by its cover.

But when it comes to publishing, the cover is much more important than it used to be. Now the proliferation of books means that more than ever an author needs a great cover to catch the eye of the reader. If you’re an e-publisher, you have only a thumbnail photo to draw the purchaser in to read the blurb and commit to a sale. 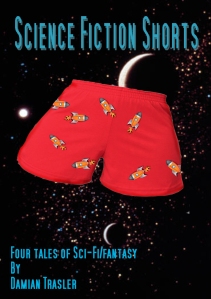 One of my better home-made cover illustrations

The chief temptation with e-publishing is to do EVERYTHING yourself. The writing, of course, you HAVE to do. The editing and proofreading…Well, to be honest, you SHOULD send that out. You can easily miss the same error in multiple readings because you know what it should say, and you can miss the plot holes because you’re the one who thought up the story so you already know who did it and why…. By the time you’re done with all that, the temptation to just pull up a photo and slap the title and your name onto it so you can publish is almost overwhelming.

But it’s a lot harder than it looks. If you trawl the “free” section of Amazon’s Kindle store, you’ll be able to spot a large percentage of the books where the authors have produced their own covers. The funny thing is, it’s hard to say how you can tell, what it is that makes them look amateurish compared to the professionally-produced covers.

For my next book “Eddie and the Kingdom”, I had a definite idea of the cover. There’s a scene where one character is running up a street. Behind her, the whole street is filled, side to side, with a horde of zombies. I wanted the street and the horde to be in black and white, and the running woman in colour. Except I didn’t have a handy cast of extras in zombie make up, nor the ability to shut the streets of Vancouver. None of the women I knew wanted to run barefoot towards a camera either (because it’s December, that’s why….)

I tried stitching together the picture I wanted from numerous sources, but couldn’t do it well enough with photos I was allowed to use – It’s important that you hold the copyright to the pictures, or buy a license for them. Then I got in touch with Eric Hubbel through Google+ and engaged his services as a cover designer. He talked through what I wanted and agreed the cover as I imagined it would be tricky to pull off. He asked me if I had any other ideas. That’s when I remembered that what I had originally wanted was a view through a wire fence of a sign saying “Welcome to the Kingdom”…Perhaps with a zombie’s hand reaching towards the fence! This idea had been the first cover option, but I had abandoned it because I couldn’t do it. Eric returned the first version that evening and it was perfect:

Available at the Kindle Store from Monday!

Using a professional’s services is hard for the average e-publisher, because most are doing things on a tight budget. It’s not, despite what you read in the media, a great way to make money, so spending a couple of hundred dollars on proofreading, editing and getting a cover could be all your returns for the first year or more. But the higher-quality your book is in ALL aspects – content, format, grammar, spelling, plot and cover – the better your chances of making a sale and then repeat sales.

“Eddie and the Kingdom” is available through

If you’d like a chance to read a sample of the story, the first two chapters can be found at the end of  “Troubled Souls”, my short story collection, also available at Amazon.com , Amazon.ca and Amazon.co.uk

A friend and fellow publisher on Google+ also recommended the services of Harvey Bunda , who does some truly extraordinary and beautiful artwork.