Flash Fantasy No 4: Non-Epic tales of other lands

Japeth’s people believed that dressing in bright colours prevented a dragon noticing you. Japeth’s people fared badly in matters of common sense. And they had never won a pub quiz.

The whole of the Mynrii Valley stretched out before Japeth, a child’s patchwork blanket, rumpled but still scattered with toy farms and houses. At the North end of the valley grew the foothills of the Gormir mountains, twin ranges to the edifices that Japeth was resting on. The difference was that the Gormir mountains held the Dragonryder academy, and the bustling trade and government centre that flourished thanks to the ease of transport a-dragonback. Messages or cargo could be flown across the land faster than the fleetest vessel on the seas, and they could reach a mountain stronghold as easily as a lowland farm.

Japeth tore his gaze away and turned back to the goat-track that he had been following for the last three hours. It was easier to find now the sun was above the horizon, but that meant he had less time to achieve his goal. He must reach the caves before noon. The urgency wasn’t just down to his impatience. There was no academy on these mountains, the grim and forbidding Hagomir Peaks. No government centre would be built here, for this range held the breeding colonies for the giant beasts themselves. Breeding dragons in captivity had never succeeded, so each year a group of specially trained boys would leave the academy and make the hazardous climb up the Hagomir peaks. If they had studied hard and proved themselves worthy, they would join with a young dragon and begin a new life as dragonryders. If they failed…Well, then they would be missed by their mothers, Japeth supposed. His own mother hadn’t even noticed he was gone, he was certain. Mareth had seven children, with Japeth buried in the middle so firmly that they had three times missed his birthday, and once given his prized hide jacket to a cousin, believing it to belong to an older brother who had outgrown it.

“They’ll see,” muttered Japeth, as his second-hand boots clung to the goat-trail and his hands grabbed at craw-grass to aid his uphill climb, “they’ll remember my name when I fly down out of the sun on my own dragon and burn the damn barn to cinders!”

Brindmir, Japeth’s younger sister, had learned of his plan and tried to talk him out of it. Though he loved her best of all his siblings, Japeth had become enraged when Brindmir would not accept that he stood a chance of taming a wild dragon.

“It’s my destiny!” he had shouted, and heard the echo rebound from the mountains beyond their farm. Surely that was a sign? Brindmir had crossed her arms and wrinkled her nose in a pose that looked so much like their mother he had felt momentarily ashamed of himself. She sniffed and he scowled.

“What do they learn, those boys up at the academy? What’s the first thing they learn when they arrive at that place?”

“So there you have it Japeth! You don’t know THE FIRST THING about taming a dragon. It’s foolishness.”

And she had flounced away. Maybe if she had called him stupid, he might have reconsidered. But “foolishness” was a word their mother used all too often in connection with the things that Japeth loved, and to hear it from his sister goaded him beyond reason. He had gone straight to the kitchen and packed some provisions for his climb, then begun the ascent in the darkness before dawn, trusting his uncanny night vision to keep from tumbling down the mountainside to his doom.

Drenched in sweat, he reached the first of the den-caves when the sun was still around an hour from its zenith. He plunged without hesitation into the nearest den, barely noticing the cooling of his damp shirt as he stepped out of the sunshine. He closed his eyes and counted to ten, restoring the night vision he would need because he hadn’t thought to bring a light with him.

The cave was narrow near the opening, though still reaching to more than twice his height. The edges of the opening had been scoured smooth by generations of dragonhide pushing past. Tiny bones clicked and cracked under Japeth’s feet, regurgitated remains of meals long past. The air was cooler than outside, but there was a warmth to it that put Japeth in mind of the stables at home – the air had already been breathed once or twice by larger lungs than his. A dry rustling sounded from ahead, just around a curve in the cave wall, and Japeth hurried forward eagerly. His destiny was so close now! The final answer to all those indignities and injustices! He would show them all!

The dragon was still sitting in the remains of its egg, though it looked to have hatched several months ago. Already ten feet from nose to tail, the scales had hardened enough to scrape sparks from the floor when it lurched forward towards Japeth. He stopped as if running into a wall, and the dragon pulled up too. It cocked its head quizzically at him, as if trying to understand why he was there, and who he was.

For the first time, Japeth began to appreciate the scale of a dragon. Not the hide, but the size in relation to himself. He had seen dozens, but always wheeling and circling overhead. He’d never actually seen one up close. This one was huge, each tooth the length of his hands, and with a jaw wide enough to fit in his whole head! The nostrils flared and contracted, and Japeth felt the air around him drawn in to the mighty head. It was sniffing him!

He couldn’t help feeling a flicker of hope. This was it! This was the moment when the dragon would recognise him, when it and he would join together for life… Wasn’t it? Japeth was suddenly acutely aware that he didn’t actually, when you got right down to it, know how that actually happened. Was it really a mystical thing, or was it more like old Barker at home, training the dogs to obey by feeding them treats at the right time? Should he, perhaps, have brought some kind of treat for the dragon?

A silvery tongue was flickering in and out of the huge mouth now, weaving amongst the fangs like a sentient thing. One clawed foot rose, wavered, and came down again, closer to Japeth. A second rose…The thing was coming towards him! This was, clearly, a very, very bad idea…..But Japeth could not bring himself to turn his back on the dragon. He tried to take a hesitant step backwards, but his feet would not move.

Then, miraculously, the dragon ahead of him stopped moving forward! It lowered its head, laying one cheek on the floor. This was a sign of submission! Japeth was elated, his dreams were coming true at last. The dragon was submitting to him as its master. But his cowardly feet would no more move forward than they would retreat before. And there was a new sound, he realised. A heavy, crunching sound that…was…coming…from…behind…him.

He didn’t need to turn. The great head of the mother dragon slid silently across the roof of the cave above him. It was to this presence that the young dragon had been submitting. The mother made a deep booming noise in her throat and the young dragon gave a surprisingly light chirrup in response, rolling back to its feet and reaching up its long neck to caress the huge jawbone of the mother with its own headcrest. When the crashing noise of their greeting was done, both heads swung to look at Japeth.

“That moment,” he thought, “just then when they were looking at each other. That was when I should have made a dash for the way out.” The heads slid towards him as if on rails and his terror finally communicated itself to his feet who moved at last but too slowly…

The mother watched her child feeding with pride. It wasn’t often that food delivered itself to the mountain. She couldn’t help feeling there was something special about this one.

The Flash Fantasy Project 3: non-epic tales of other lands 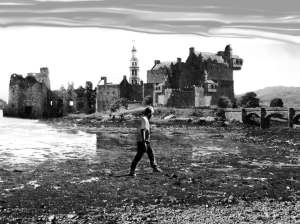 Brin stepped out into the light at last. Here, in the one area of the hall where sunlight fell, no one could miss him. His mane of golden hair seemed to blaze in the last rays of daylight and he towered over the nearest goblins.

They shrank back, hissing, as they recognised their master’s mortal foe. Grimnok himself, however, seemed unsurprised by Brin’s appearance.

“Ah, Brin. The Chosen One himself honours us with his presence.”

Grimnok’s eyes flickered over the dark corners of his hall, and the cowering ranks of goblins.

“If we’d known you were coming, we might have made more of an effort.”

Brin stood tall in the face of the dark one’s sarcasm.

“You don’t scare me anymore, Grimnok. I’ve read the prophecy, and I know what it means. You can’t kill me, and if you can’t kill me then this war is over. No one else needs to die. I’ve come here to prevent any more bloodshed. It’s over. Get out, and leave Nimeria in peace!”

Grimnok stroked his thin beard as he looked at Brin. The boy had grown in his time with the Wizards of Nimeria, there was no denying it. And he had found out the truth of the prophecy. It was possible that this changed things, that his plan to crush the Nimerian resistance forever was, in fact, doomed to fail.

“Well Brin, I’m glad you read the prophecy. Reading is good for you, it broadens the mind. And it’s true, the Sage did foresee that the Wizard’s meddling spells would prevent me from killing you.”

Everyone in the hall saw Brin’s shoulders drop a little, as if he had let out a breath he had been holding. But surely even a great hero like the Chosen One would not come into the hall of his greatest enemy while uncertain of his own protection? Grimnok smiled and gave a carefree wave of his hand.

“Certainly, it’s possible that you have me at a disadvantage. Not being able to kill you myself DOES put a crimp in my plans. However, if you’ll indulge me, there is a little something I’d like to try before surrendering.”

This time he waved his other hand and a third of the goblin horde drew bows from under their tattered cloaks and fired.

For a second, Brin resembled a rearing hedgehog, but then his knees gave way and he crashed to the floor, a human pincushion.

“Thought so.” muttered Grimnok. “Arkleblog? Begin the invasion, would you? I’ll be in my study.”