Thor and Loki, fighting as usual…

This was our third visit to FanExpo Vancouver, but only the second year we actually got inside. We’d been planning the day for ages – tickets bought well in advance, Weasels’ costumes worked out – but the last couple of days before were a blur of activity. Somehow, this did not include me getting the adjustments to my own costume done. Next year. Maybe.

Tiny Weasel had settled on a version of Ana from Frozen who is only onscreen for a few moments during the song “Do you want to build a Snowman?” but it came out pretty well, thanks to Mrs Dim’s sewing skills and some decorating on my part. 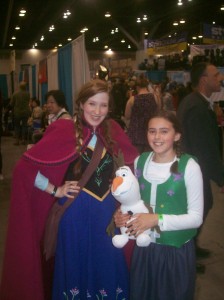 Tiny Weasel on the right, with a borrowed Olaf, meeting an older version of Ana.

Middle Weasel had chosen the slightly more obscure computer game character Juno Eclipse. I built the hat, the gun rig, the rank badge and belt buckle, and Mrs Dim produced an awesome uniform jacket that will see plenty more use in everyday life.

These two members of the 501st made a good honour guard for Middle Weasel’s arrival.

Eldest Weasel is usually quite shy and retiring, but she wanted to be a Time Lord, so Mrs Dim produced some fabulous robes, and I put together a headpiece based on the one worn by Timothy Dalton as Rassilon. She walked everywhere with an amazing poise and confidence, even though she was stopped every few feet by people wanting photographs – even at Subway! 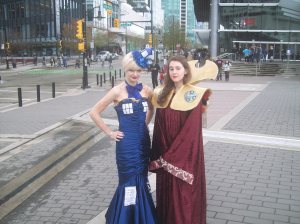 This year the venue was larger, and we arrived early on the Sunday, so things were quieter for the first hour or so. We had a good chance to wander the booths and chat to the vendors and exhibitors, and saw some of the big names arriving for their signing sessions – Tom Felton, Charisma Carpenter, Eliza Dushku, Robert Englund…. (No photos of them this year, sorry!)

Attending in costume, even if only through the Weasels, was a very different experience to last year’s plain clothes day. There’s more of a sense of cameraderie with the other cosplayers, and it’s such fun meeting with other groups and taking photos together, or swapping notes on costume choice and construction.

I’m going to end with a photo reel without comments : These pictures have been posted on my Facebook page and my G+ account, so I’m all commented out, but feel free to ask for explanations or identifications! 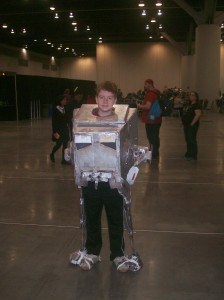 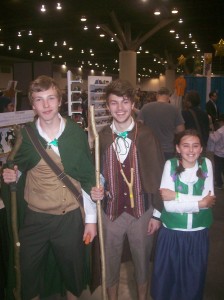 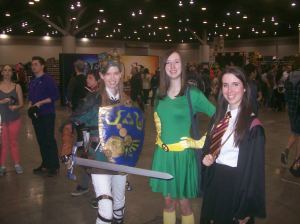 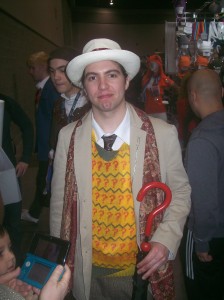 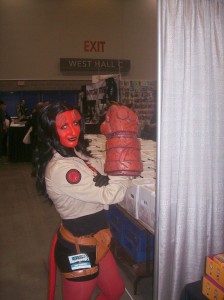 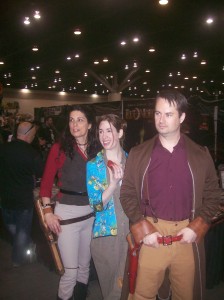 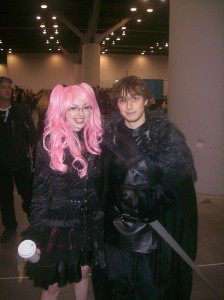 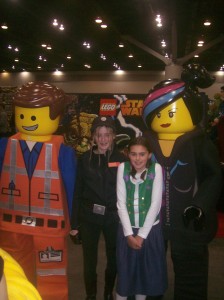 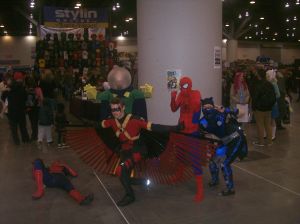 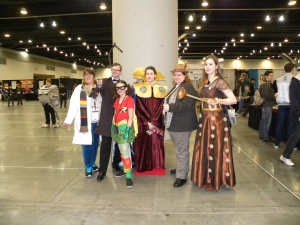 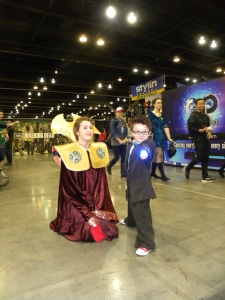 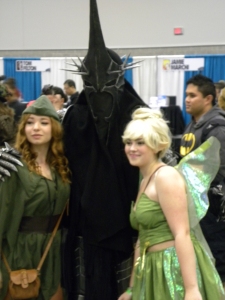 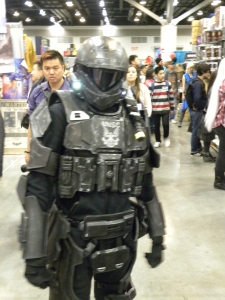 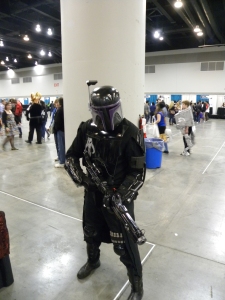 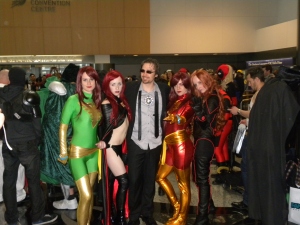 If you’ve read much of this blog, you may know that last year’s Fan Expo was an interesting experience for me and my family, but one we only got to see from the outside. Nonetheless, the parade of costumed characters coming and going was impressive.

This year, to avoid being left out in the cold, we booked our tickets well in advance. Although I’d put together my suit of Mandalorian armour in time for Hallowe’en, it wasn’t quite right, and I stripped it down for a rebuild, which wasn’t done by the time Fan Expo rolled around. That’s my excuse, and I’m sticking to it… 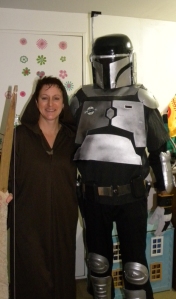 …Not appearing at this year’s Expo…

Eldest Weasel had rallied some friends and was flying the flag for Doctor Who, having transformed herself into River Song and her mates into the Doctor (11th) and TARDIS.

That left Mrs Dim and myself to herd the two smaller Weasels into the Fan Expo.

So, you need to arrive early, especially if you’ve booked photo shoots or signings or whatever. We rolled up around eleven and joined the “Saturday only” queue, which was moving along, and a pretty jolly affair. We chatted with the lady in front of us, proudly wearing her Buffy t-shirt because she would be meeting James Marsters shortly. 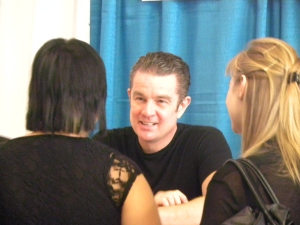 There were plenty of costumes to see in the lineup, but most were in the “Two Day” line, which wasn’t moving as fast as ours. We passed the Bunny-eared Master Chief on the way up Canada Place, and then back down it, and he didn’t seem to have moved at all…. 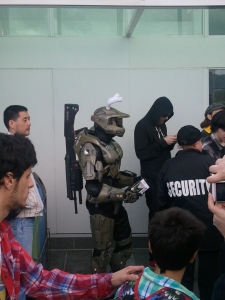 Yes, the ears are funny, but that’s an MA5B Assault Rifle on his back….

When we got to the door we had to pass an angry woman who’d been waiting a couple of hours with small children, demanding to be let in ahead of the queue because her photo shoot time was coming up. The guy on the door was apologetic but firm, explaining that there were over thirteen thousand people to organise.

We’d planned to make purchases and all kinds of excitement, but the reality was that we goggled. There’s not much opportunity for goggling in the real world these days, but at Fan Expo it was positively encouraged. Everywhere you looked were either amazing displays, like the Lego booth:

Or it was the endless stream of fantastic outfits roaming the crowded walkways.  Mrs Dim kept reminding me that they wouldn’t mind being stopped for photos, but my essentially English nature prevented me from stepping forward often enough. We were delighted to meet two of Ankh-Morpork’s finest Watch officers, Captain Carrot and Sergeant Angua, and they were delighted that we knew who they were. The two tiny weasels are considering being Nobby Nobbs and Cheri Littlebottom next year.

Carrot and Angua appear most often in the “Guards” book s of the Discworld, by Terry Pratchett.

The standard of the costumes ranged wildly, from things people had clearly cut out of cardboard the week before, to outfits that were indistinguishable from the original movie costumes. The ratio of costume to regular folks was about 1:3, so if you’re considering a costume for next year, don’t worry about being the only one – there’ll be plenty of others.

After two or three hours of strolling and gawking we were hungry and overstimulated. We wandered out and across the road to a food court and saw the most amazing mix of costumed characters and regular Vancouvians sharing tables. We queued up for pizza in front of Arthur Dent and (another) eleventh Doctor, but just behind a Hobbit. She explained she’s gone for the Hobbit costume rather than her Trek outfit. Imagine having a choice!

Even Ghostbusters need a lunchbreak…

We took our pizza outside to sit in the weak sunshine, where the gardens around the fountain were dotted with X-men, Sailor Moons, Whovians and people I still don’t recognise. Maybe they were just from Vancouver? 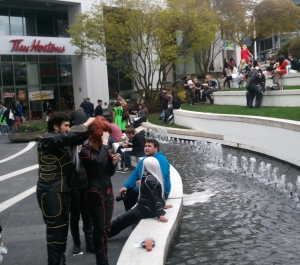 Jean Grey is having hair trouble, it seems…

After lunch it didn’t seem like a good idea forcing the Weasels back into the crowds, so we walked back to Canada Place and watched the plaza fill with people. There were dozens of impromptu photo shoots going on, and we grabbed the chance to get photos of our heroes.

These Guildies may have been one short, but their costumes were spot on. 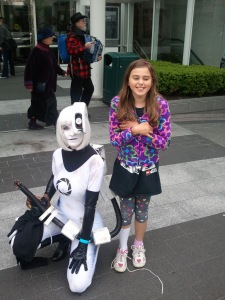 GLaDos – the best interpretive costume we saw all day. She was stopped dozens of times for photos in the space of ten yards. 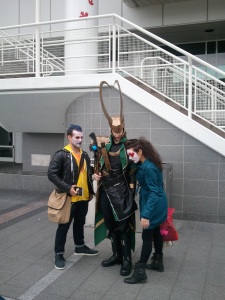 Who wouldn’t recognise that hat?

As we finally headed back through the Convention centre to the car park, we found the big group costume photo shoot going on. Everyone was smiling and laughing while a huge Thor directed like he was arranging wedding photos:

“Now VILLAINS! Ok, now all the Spidermen at the front, Batmen at the back! Black Cat, can you and that other Black Cat lie down at the front there? Let the Ghostbusters through, please!”

From above it looks like chaos, but it was organised chaos. Well, fairly organised…

We didn’t come away from Fan Expo 2013 with a lot of loot, but we’d seen some amazing costumes, been inspired all over again for next year (and Hallowe’en!) and we’d even taken some time to speak to the comic artists who are after all, the reason for the whole event. Middle Weasel was told “You have to do a million bad drawings to get a good one” and that’s good to remember in life no matter what.

Thanks for a fun day out, Fan Expo!

You never know WHO you’ll meet there! 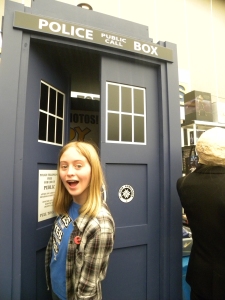 Maybe next year Fan Expo needs to be bigger on the inside?