Not so long ago there was a horrific massacre by one individual armed with several guns. This spawned the usual round of condemnation and a search for cause. Inevitably, amidst the furore over the right or wrong of gun ownership, someone took a potshot or two at violent videogames.

The argument goes something like this: Loner types sit in dark rooms playing games where they are heavily armed and can gun down imaginary people with impunity. After a certain amount of time doing this, something snaps inside their head and they go out and gun down real people. Therefore, to prevent future massacres, the logical thing to do is ban videogames. 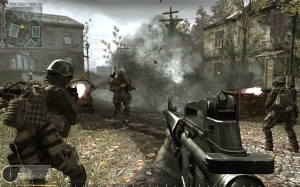 This image was selected at random and no motivation, intention or cause is intended to be associated with this game.

Here’s my disclaimer. I’m not a scientist. I’m not a psychologist or psychiatrist, I have no formal training in brain science or behavioural analysis. I have not conducted scientific experiments regarding the effects of videogames on the cerebellum or the adrenal gland, or behavioural modification arising from extended gameplay. I’m a forty year old guy who’s played videogames since he was around eight or nine – yes, “Pong” and “Space Invaders” and “Breakout” and onward. If anyone has been saturated in the world of videogames, then it’s me. I drink beer and I live in North America. There are stores near me where I can buy guns.

Oddly, like thousands and thousands of other people, I have not committed mass murder. Is there something special about my brain that allows me to resist the mind-altering effect of these violent videogames? No, I don’t think so. I think the reason that mass-murderers are often found to have stacks of violent videogames is not that they were the CAUSE of the rampage. They were present as an EFFECT of the mindset that allowed the massacre.

Let me explain. My kids played videogames from an early age. One of them was obsessed with the BBC game of “Yo Ho Ahoy!”, where Claymation pirates perform various tasks around their ship. Repeated exposure to this game did not drive my daughter to become a pirate. Nor did it, I can positively assert, encourage her to mop the floor on a regular basis. The game appeared to do NOTHING to alter her behaviour from what it was. I think this is because she played the game to be involved in a tv programme she enjoyed. She liked the show on tv, and this game allowed her to interact with the characters, watch clips, hear their catchphrases.

I’m a big Star Wars fan. I was five when it came out, and I have grown up with the movies, the books, the extended universe. I have some Star Wars toys still, and a lightsabre. Well…ok, two lightsabres, the one I bought and the one I made myself. To go with my Jedi robes. Ahem.

Anyway, when Lucasfilm produced games that allowed you to play as a young person becoming a Jedi Knight, I leapt at the chance to buy one. I bought the series and have played it through many times. So has my family. None of us have ever tried to emulate the gameplay by decapitating strangers with our home made lightsabres. We play the games because they are a simulation of something we would like to be able to do.

Did I mention we’re all Star Wars fans?

Do you see where I’m going with this?

Those murderers weren’t inspired to kill by the games they played. They played the games because it was an opportunity to play out the things that they wanted to do. Playing “Star Wars Starfighter” doesn’t make me want to fly a starship – Wanting to fly a starship makes me PLAY THE GAME. For those would-be murderers, playing the first-person shooter games was a place they could fulfil their need to shoot and kill. For some people, this simulation will be sufficient and they will not go further. For some it will not be enough, just like some people find they only want to smoke cigarettes, while others want to smoke dope and others move on from dope to hard drugs. Why do some people need to escalate and not others? I don’t know. I’m sure there are scientific studies on that somewhere.

We’ll hear this argument again and again, because the real causes of these horrible events are far more complex. They are to do with a lack of empathy, a loss of hope, a lack of role models, of boundaries, of discipline and so many other conflicting things that untangling it could take decades, even if EVERYONE was trying. And they’re really, really not trying. Because fixing it will almost certainly cost a lot of money and it will almost certainly affect someone’s profits. Governments don’t like splashing out money on long-term social issues because the slow results don’t drive votes. And corporations prefer profits to people. It’s easier, in the short term, to advocate banning a small selection of videogames.