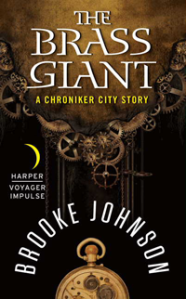 I’ve blogged before about Brooke Johnson and her books, but she’s recently reworked the book I reviewed for real-world publication as “The Brass Giant” and so I thought I’d ask her some impertinent questions.

1: When did you start writing?

I started writing seriously (with the goal to be published) when I was about fourteen. I started a fantasy novel that was a horrible conglomeration of Harry Potter, The Chronicles of Narnia, and The Lord of the Rings, that thankfully died after its eighth or ninth iteration when I decided to write something else five years later.

2: What was your path to publication?
In a word: weird.
When I sat down to write the book that would eventually become The Brass Giant, I made the decision to self-publish  because 1) I really didn’t want to go the query route and face the months of rejection on that path; 2) I felt that steampunk was “in” and I didn’t want to waste time with traditional publishing when it would be at least a couple of years before the book saw print; and 3) I just really felt like it was the right decision at the time. So that’s what I did.

A year later, Harper Voyager put out an open call for submissions. Figuring it wouldn’t hurt to enter, I submitted the book and promptly forgot about it. Fast-forward another year and a half, I got an email from a Harper Voyager editor saying they wanted to publish my book. After much flabbergasted squeeing, I decided that I’d done what I could with self-publishing and signed a contract with the publisher. In the months since, I have been prone to varying degrees of stress and madness, and will soon have a traditionally published book to show for it.

3: Who was your biggest influence when you were starting out?

It was always a mixture of things when I first started writing, elements from my favorite books, movies, and video games, all cobbled together into one story. Stylistically, probably J.K. Rowling. I still primarily write third-person point of view and I will always write dialogue tags with “said” before the name of the person speaking.

4: What is your favourite piece of writing advice?

I’ve gotten a lot of bad writing advice over the years, and very little good advice, so this is a tough one… probably “Write the story you want to read.” It’s the one dictum I’ve actually been able to stick to throughout the years.

5: If you could send one Tweet back in time to your past self, what would it say? And would you listen?

Oh gosh… Um… “Stop wasting time on the internet and get to work. You won’t have the luxury of spare time in a few years.” Would I listen? Probably not.

6: What’s the logline for your latest book?

When Petra Wade meets Guild engineer Emmerich Goss, she finally has a chance to prove her worth as an engineer building a top-secret, Guild-sanctioned automaton, but as their project nears completion, Petra discovers a sinister conspiracy within the Guild … and their automaton is only the beginning.

7: Do you take part in a writing circle, either online or in real life?

I did when I was in college, but I never liked it–I’m not much of a group person. I also had a critique partner once, but it fizzled out when life happened. These days, I write all by myself and rarely read other writers’ work before publication, though I do often share scenes or snippets with a few close friends to get initial feedback.

8: Finally, what word do you always type incorrectly?

So, what about the book?

Sometimes, even the most unlikely person can change the world

Seventeen-year-old Petra Wade, self-taught clockwork engineer, wants nothing more than to become a certified member of the Guild, an impossible dream for a lowly shop girl. Still, she refuses to give up, tinkering with any machine she can get her hands on, in between working and babysitting her foster siblings.

When Emmerich Goss—handsome, privileged, and newly recruited into the Guild—needs help designing a new clockwork system for a top-secret automaton, it seems Petra has finally found the opportunity she’s been waiting for. But if her involvement on the project is discovered, Emmerich will be marked for treason, and a far more dire fate would await Petra.

Working together in secret, they build the clockwork giant, but as the deadline for its completion nears, Petra discovers a sinister conspiracy from within the Guild council … and their automaton is just the beginning.

Brooke Johnson is a stay-at-home mom and tea-loving writer. As the jack-of-all-trades bard of the family, she journeys through life with her husband, daughter, and dog. She currently resides in Northwest Arkansas but hopes to one day live somewhere more mountainous.