I’ve spent a lot of today fighting the feeling that I’ve missed out. Here we are in Vancouver for the Winter Olympic Games, and I didn’t see any of it live. That’s fair enough, tickets were as easy to find as Rocking Horse poo, but I also didn’t take the time to go Downtown and feel the atmosphere as everyone got into the Olympic spirit.

I was reminded of all this today because it was the Opening Ceremony of the Paralympic Games. We have a stake in this because Eldest Weasel is a member of her school choir and was going to be singing at the ceremony. She went to the rehearsal yesterday and came back bubbling with excitement but unable to tell us anything about the plans because she had been sworn to secrecy.

Mrs Dim and I had discussed the event and how to cope with it. You may remember that we sat down as a family and watched the Olympic Opening Ceremony…Well, Mrs Dim and I sat down, the Weasels hopped up and down, had fights, asked if they could play on the Wii, asked what was on the other channel etc etc. It didn’t seem fair to expect the two tinier weasels to sit through the whole ceremony on the promise of getting a glimpse of Big Sister way off in the distance. It would mean a long night, and we’d be getting home very late, so I volunteered to stay home with them, record the live coverage (and watch it, obviously) and Mrs Dim would get a ticket and attend in person. It turns out we were lucky to get our ticket early, because demand has been high. Vancouver has missed the Games in the last few days, and the promise of more national pride and Olympic partying has meant tickets for every event are being snapped up.

I got several calls from Mrs Dim inside BC place, well ahead of time. She doesn’t deal well with having time on her hands, but she found her way through to where the choirs were waiting and had a hug with Eldest Weasel, giving me a chance to wish her luck over the phone.

I rustled up a world-class evening meal (ok, pizza and sliced vegetables….and Cheetos) and the Tiny Weasels and I sat around the coffee table, munching and watching the Ceremony get under way. I was surprised, just like with the last ceremony, which bits they found impressive. Middle Weasel was gasping with delight at the projected flowers that bloomed around the arena as a girl danced to a violin, but was unmoved by the break dancer who couldn’t use his legs. The speeches were a low point for the weasels too, though I was impressed by the Governor General of Canada in her smart purple leather outfit joining in the performance and opening the games with a genuine grin. She really seems to love her job.

So the highlight of the evening was always going to be the song “We rise again” sung by Nikki Yanovsky and, crucially, the massed school choirs. When Eldest Weasel first told us about this, she said she was going to be one of four hundred kids singing. When we saw the paperwork, it turned out to be four THOUSAND. The odds of spotting her were not good, especially as the cameramen were far more inerested in Nikki. But amazingly, on the first shot of the choir, there she was. It took a couple of seconds to spot her, and the shot was only four seconds long, but even Tiniest Weasel managed to focus and recognise her before the shot changed. This is something of a minor miracle, for the child who couldn’t see the Angel of the North as we drove by it.

So I couldn’t tell you the name of the lad who lit the cauldron, or anything else that happened after we saw Eldest Weasel. It was a good show, definitely enough to show that the Paralympics are not the poorer sibling these days, but a major sporting event in their own right. Perhaps the day when they take place simultaneously with the Olympics is getting closer.

Two tired weasels have brushed their teeth and gone to bed, and I’m considering diving back into reviewing some plays before I have to bring Eldest Weasel back from her school rendezvous point. Did I really miss out? No. I’m here, in Vancouver, when it’s all happening. Hearing the cheer go up when Canada won the gold in Hockey a few days ago, it didn’t matter that I was on the shop floor and not in Robson Square. If we were still in the UK, I wouldn’t have given a second thought to the Winter Games, so the previous weeks, and the weeks to come, are a pleasant surprise.

Tomorrow I’m working through the whole day, so I expect my smile muscles will cramp, but at least I’ll learn where some more items are around the store. If you need anything for your home improvement, drop in and say hello. 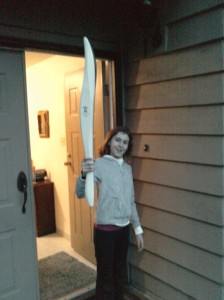 Eldest Weasel holds the torch, and then got to sing at the Opening Ceremony 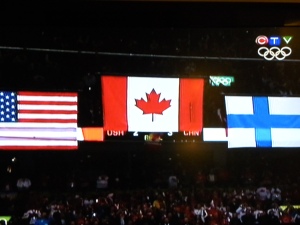 Yesterday was big deal for Canadians. It was the big rematch of the Winter Games, the Gold Medal Hockey tussle between the US and Canada. It seemed to be the only topic of conversation for a lot of people. I caught the beginning of the game before I had to leave for work, and the Canadians were ahead by two goals to one when I left. I made it into work to find the TV on in the Break Room and folks glued to it. I had to be down on the shop floor, so I wandered away. Somewhere there was a radio piping commentary of the match into the shop, but Hockey Commentary is a mystery to me, since the game moves so fast and I didn’t know which players were on which team (shocking, I know, but give me a chance, we’ve only been here a year!) Still, co-workers were always passing by and happy to give news of the progress of the game.
“The Americans equalised, just seconds to go!” Big groan from everyone nearby. Then a few minutes after that the tannoy squawked into life:
“What did I tell you, Andy? Canada WIN! 3-2” Cheers from all around the store, customers and workers alike. Almost immediately the place began to fill up. The place had been almost deserted during play, but now the game was done people flocked in. Almost all of them were grinning. The first few were eager either to tell me the result of the match, or find it out from me. We had folks wearing flags, with maple leaf face paint, Canada jackets, T-shirts, hats… One lady said she’d been in CostCo when the match was won and the place went mad. I couldn’t work out why CostCo in particular, but then I remembered they have a huge display of big-screen TVs. Where better to watch the match?
I was sorry to miss the closing ceremony, but got home to find Mrs Dim had recorded it for me. I had been surprised by how brilliant the opening ceremony had been, and regretted not recording that, so I’m looking forward to watching this one later.
People are starting to wonder what we’re all going to do now the Olympics have happened. Are we going to go into a post-apocolympic slump? But that’s not really fair. In a few days, on March 12th we get the Paralympics, and if you thought the struggle of the athletes in the regular games was inspiring, you ain’t seen nothing yet. I shall be watching the opening ceremony (and recording it) because Eldest Weasel is one of the schoolchildren who’ll be singing with Nikki Yanovsky, and I spent a good deal of today wrestling with the ticketing system to try and get a ticket for Mrs Dim to attend in person. No joy so far, but I think it’s churlish to complain about something like that when the events themselves will feature people who have overcome far more. I will not be defeated by beaureacracy…though the spelling may give me pause.

So Week Two of Work has begun, and it’s going well. The times are fitting in nicely with Educating Weasels and Mrs Dim’s schedule, and I’m getting enough writing done to feel like I’m not writing to support my new career in retail. (Oh, my new play! It’s going SO WELL. Of course, I’ve had to halve the length and revise my grand plans, but it’s GOING SO WELL! Don’t tell anyone, though. It’s easily startled.) I still don’t have my schedule for the week after next, so I don’t know if my shifts will line up with my elephants and allow me to go on holiday. Now we’re into March time is moving even faster. There’s only a handful of days before Spring Break, only a few more to the holiday and once we’re back from that it’s packing and moving. Tomorrow I’ll pile into the redirection business again. Seems weird, trying to remember what it’s like to be unpacking boxes – this house has been sorted for a while now. We even stopped changing the pictures around, so maybe we got those right at last. Must be time to move.