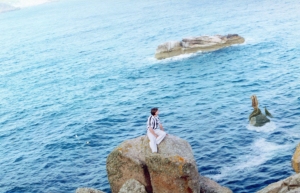 Well, the picture won’t look familiar. That’s me, on a rock at Land’s End, more years ago than I care to think about. I’m the one in the stripey shirt. I was looking for a picture to illustrate the post and this one was the closest I could find without riping someone off, copyright-wise, or going out and taking a picture. I only have half an hour, so that wasn’t an option.

This looks familiar, because there have been many times in my life where I’ve been at this point: On the edge, about to dive in. It’s the day before I start a new job.

Some people may think that DamnNearlyForty is a stupid age to be getting a new job. They’d be right. They’d also have thought that having a job which involves saying “Hello” to people as they enter a store while wearing a brightly coloured apron with my name on it was demeaning. I won’t comment on that. 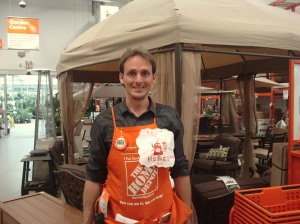 There are many ideas about what you should do before starting a new job. I’m horribly aware that I am doing NONE OF THEM! I haven’t researched my new company on the internet. I haven’t googled my new manager to see if he’s on Facebook (Or the FBI’s 10 Most Wanted). I haven’t planned my ensemble for the morning to make sure my shoes don’t clash with my tie. I haven’t even assembled some family photographs, holiday keepsakes and a fluffy toy to decorate my desk. Yes, there are many ways to go into a new job, but I’ve never heard anyone recommend ‘Half-arsed” as a good method. Still, that’s the one I’m going with.

There is a difference between this job and the others I’ve taken in the past. For one thing, this job is a step up from the one I’ve been doing (No disrespect to The World’s Largest Home Improvement Retailer, but this actually requires a skillset beyond smiling and remaining chipper despite an eight hour shift…) I haven’t moved up a grade of work since my days in the Civil Service.

*Question: How many people work in the Civil Service?

Answer: About half of them.*

I wasn’t promoted on merit back then, it was just that a permanent job came about for my grade, and I moved up from temporary to permanent status. Good, but not the same. In this case, I took the first job I could to help the family with mortgages and bills, and now I’ve found a better paid job with fewer expenses, and as a bonus it requires me to do something I’m quite good at: proofreading.

The big question is, what happens with the writing? In my previous working life, I had days off during the week. Once the Weasels were in school, I was at leisure to knock out the odd sketch, or a play, or a panto. With my new job, I’m in the office Monday to Friday, 9-1. That does leave about an hour a day before I have to collect weasels, but will I use it wisely?

Given that I’ve spent most of today surfing the net, laughing at other people’s blogs and watching YouTube, I have my doubts.

What’s been YOUR weirdest employment experience? Do you write more when you have a day job, or less? Have you ever worn an apron to work? Was it on purpose? In the days before I took up working for a living, I wrote an e-book on writing plays, called “Writing a play for Community Theatre” and you can download it from www.tlc-creative.co.uk  . If 25,000 people do that each year, I won’t have to go to work at all. There’s a nice thought.