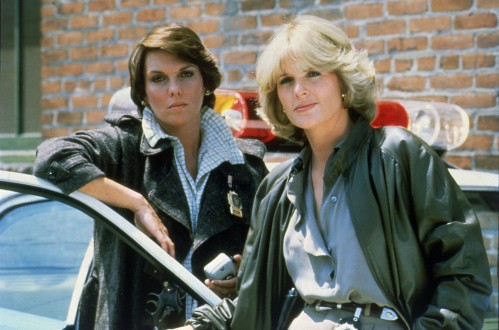 Cagney and Lacey ran from 1982 to 1988. According to Wikipedia, “For six consecutive years, one of the two lead actresses won the Emmy for Best Lead Actress in a Drama (four wins for Daly, two for Gless), a winning streak unmatched in any major category by a show.”

Having seen the outrage and fiery passion ignited by the Wonder Woman movie, I found it amazing to consider the success of Cagney and Lacey, which was, obviously, back in the “bad old days”. It’s surely no coincidence that the success of the show didn’t spawn dozens of similar shows with two female leads. In fact, the closest I can think of is the TV show “Scott and Bailey”, which did not begin until 2011, 23 years after Cagney and Lacey ended. When you see the proliferation of similar shows that burst onto the screen when the originals are proven successes – Game of Thrones, Stranger Things, The Wire – it’s surely only entrenched patriarchy that prevented a flood of female-lead cop shows.

What others can we point to? There’s the excellent “Prime Suspect” that places Helen Mirren in command, fighting the prejudice of her fellow officers as much as she tries to unravel the crimes. Again, it won awards, garnered mountains of praise, ran for seven seasons and produced…What? There seem to be few imitators or successors.

When I started out to write a police procedural for the stage, I wanted to have a female lead. Originally she was going to be channeling advice from a fictional P.I. , but I soon realised that I wanted her to be working on her own, solving things herself. The second lead character shouldered her way into the spotlight a little unexpectedly. After she appeared, I went back and re-wrote the beginning, so that she – Maylee – could be a balance for Alice, the detective.

With all that has come to light in the past two weeks – Harvey Weinstein and the morass of sexual predation in Hollywood and elsewhere – it feels less appropriate than ever for me to be writing a play about the struggles of two women. White, middle class, middle-aged men have had more than their fair share of the spotlight these last few hundred years. I have no doubt there are women out there who could write a more personal, more real account of Maylee and Alice than I ever could. Odds are, there’s a better story than mine already published.

But here’s the thing: I’m a writer. I have an idea, and I have to write it. It might take months, or years, or it might be done in a day, but they turn up and get written down. I can choose which ones get my time and attention, but I can’t choose which ideas occur to me. If I could, I would write the things that follow the current market, whatever they are.

Writing is a profession that is full of people with Imposter Syndrome. Writers mistrust their own opinion of their work, they doubt themselves and they second-guess reactions to what they write. I already spend enough time doubting that what I produce is worthwhile, or readable. Since I don’t intend any disrespect or denigration to women, I don’t fear criticism for what I’m writing. As I said above, there are people who could write these things better than I could, so I would welcome any constructive criticisms. I’ll continue to write what it occurs to me to write, and I’ll listen to any objections that anyone has to offer.

You can read the full text of “Alice and the Cold Case” here. Many of my other plays contain strong female characters. You could try reading “The Kitchen Skirmishes“, or “The Red Balloon“, or “Digging up Edwin Plant“. There’s also “A Time for Farewells“, and “Love in a Time of Zombies“.